Proco Style 233 expansion joints are built to withstand even the most rigorous piping system configurations. They are triple wide-arch products, specifically constructed to reduce or eliminate common occurrences such as noise and vibration, misalignment/offset, or turbulence. Style 233 expansion joints are appropriate for a wide variety of industrial applications, and are available in open arch and filled arch configurations.

Some of the notable features and benefits of the Proco Style 233 are:

For more information about the features and benefits of the Proco Style 233, download our brochure. 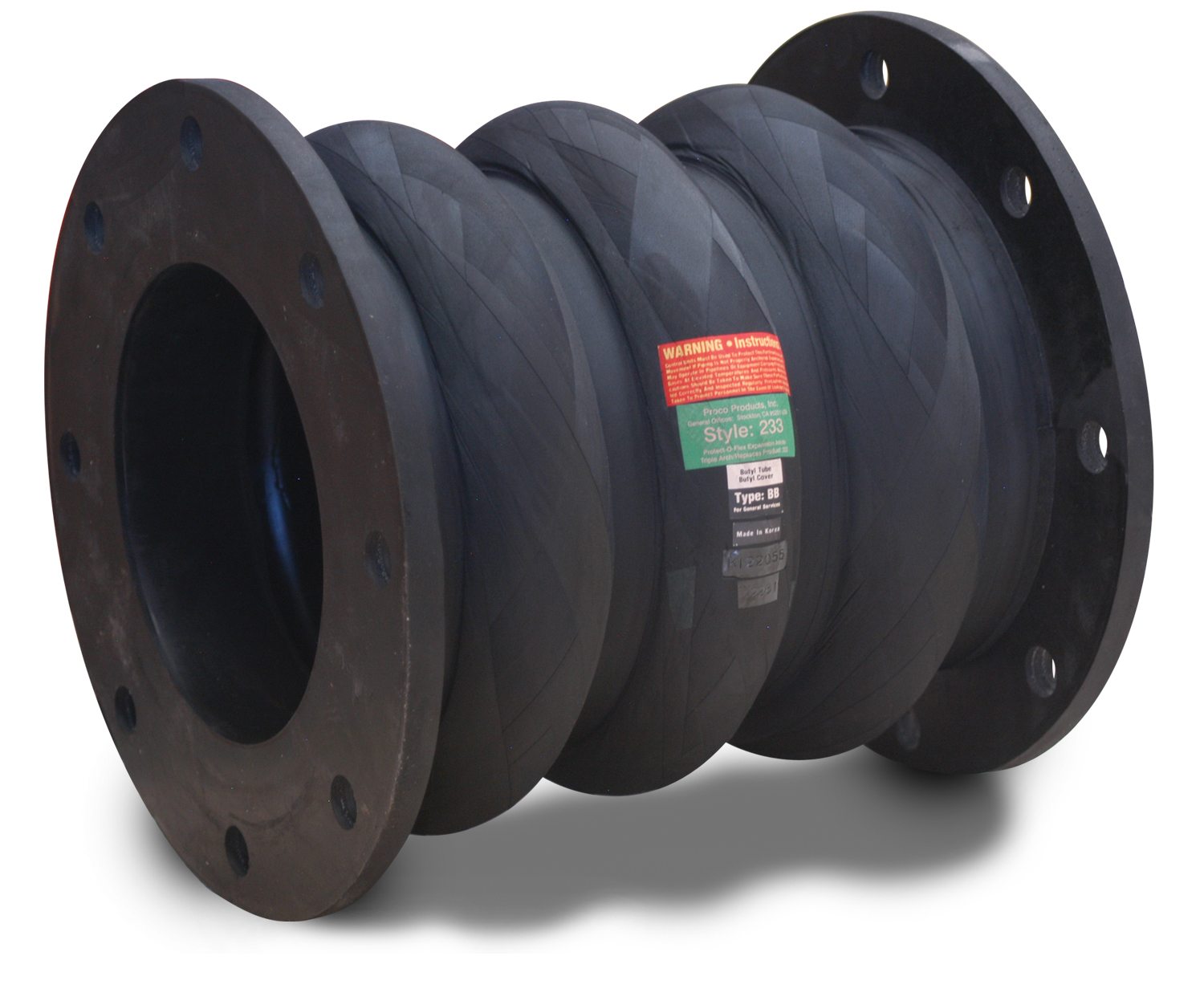 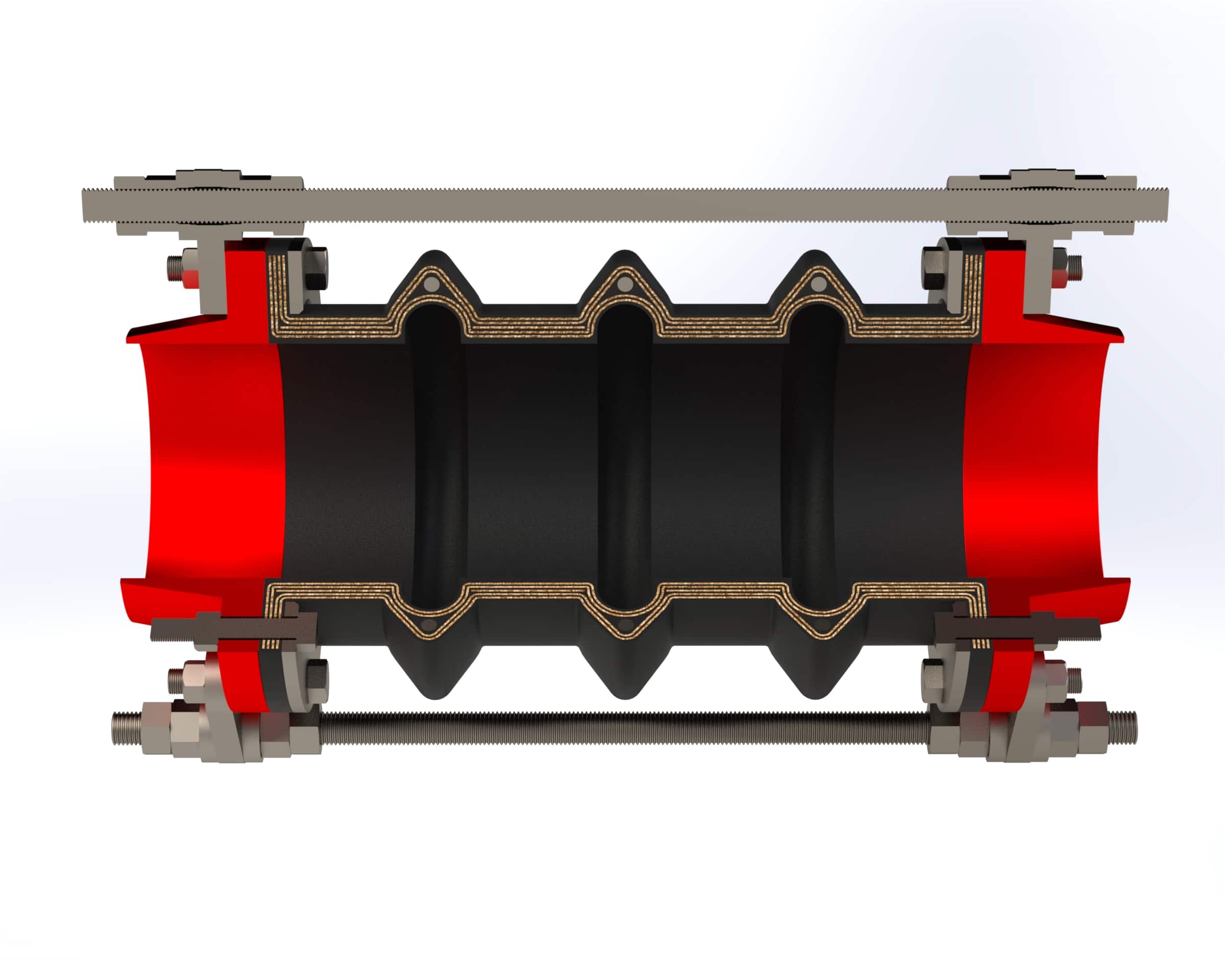 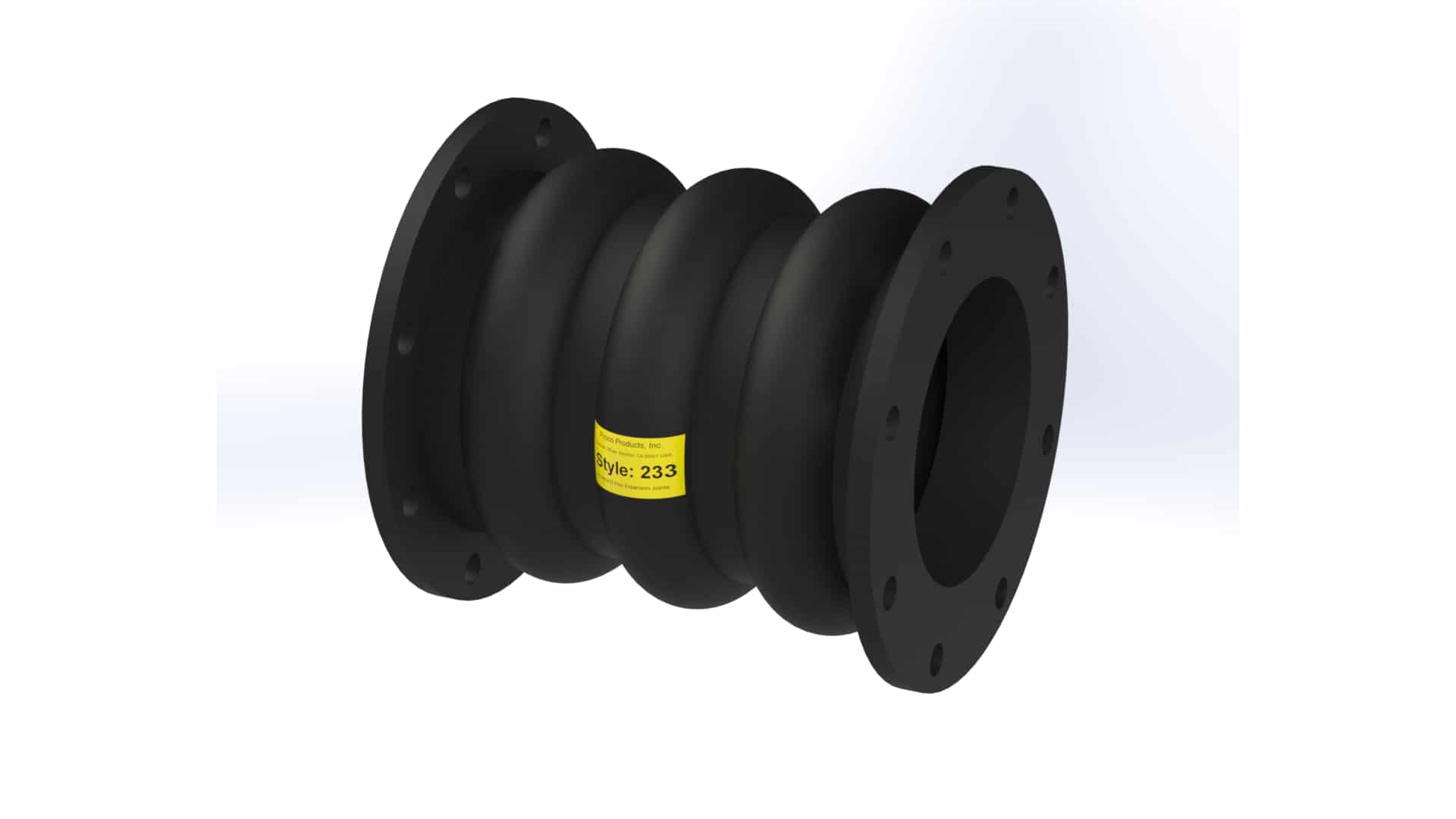 All products are reinforced with Polyester Tire Cord
1.  Expansion Joint “Cover” can be coated with CSM UV Resistant Coating.
2.  All NN & NP elastomer designated joints meet the Coast Guard Requirements and conform to ASTM F 1123-87 and are marked accordingly.
3.  Branding Label will be marked as “Food Grade”.
4.  All elastomers above are not intended for steam service.
5.  BB or EE are good for 300°F blower service at 20 PSI or less.

Calculation must be equal to or less than 1 for expansion joint to operate within concurrent movement capability.
2. Filled Arch Rubber Expansion Joints – Known as Style FA 233. The Series FA230 rubber expansion joints should be selected when there are 20% or more solids being conveyed in the pipe system. The filled arch products are manufactured with seamless tube filled with a lower durometer rubber in the arch core. The filled arch product will have a 50% reduced movement capability from the information provided in Table 4.
3. Pressure rating is based on 170˚ F operating temperature with a 4:1 safety factor. At higher temperatures, the pressure rating is reduced slightly. Hydrostatic testing at 1.5 times rated maximum catalogue pressure or design working pressure of pipe system for 10 minutes is available upon request.
4. Weights are approximate and vary due to length.
5. The degree of angular movement is based on the maximum rated extension.
6. Torsional movement is expressed when the expansion joint is at neutral length.
7. Calculation of Thrust (Thrust Factor). When expansion joints are installed in the pipeline, the static portion of the thrust is calculated as a product of the area of the I.D. of the arch of the expansion joint times the maximum pressure (design, test or surge) that will occur in the line. The result is a force expressed in pounds. Take Design, surge or test pressure X thrust factor to calculate end thrust.
8. Parts listed at 26” Hg / 660 mm Hg vacuum have a design rating of 30” Hg / 762 mm Hg (full vacuum). Vacuum rating is based on neutral installed length, without external load. Products should not be installed “extended” on vacuum applications.
9. Limit rod unit weight consists of one rod with washers, nuts and two limit rod plates. Multiply number of limit rods needed for the application (as specified in the Fluid Sealing Association’s Technical Handbook, Seventh Edition or table 4 in this manual) to determine correct weights.

Notes:
1. Limit/Control Rod length is determined by neutral length of rubber expansion joint, rated extension, control rod plate thickness, mating flange thickness and number of nuts. Consult PROCO for rod lengths.
2. Flange Dimensions shown are in accordance with ANSI B16.1 and ANSI B16.5 Class 125/150, AWWA C-207-07, Tbl 2 and 3 – Class D, Table 4 – Class E. Hole size shown is 1/8” larger than AWWA Standard.
3. Adjacent mating flange thickness is required to determine overall rod length and compression sleeve length (if required).
4. Plate thickness is based on a maximum width PROCO would use to design a Limit/Control Rod plate.
5. Flat Washers required at ring splits and are supplied by others.
6. Control rod plate O.D. installed dimension is based on a maximum O.D. Proco would supply.
7. Control rod diameter is based on a maximum diameter Proco would use to design a control rod.

A control rod unit consists of limit rods, tie rods, or compression sleeves, and a control unit assembly is a system of two or more control rod units placed across an expansion joint from flange to flange. Its purpose is to minimize possible damage caused by excessive motion of a pipeline. Control unit assemblies can be set at the maximum allowable expansion and / or contraction of the rubber expansion joint.

Listed below are three control unit configurations supplied by Proco that are commonly used with rubber expansion joints in piping systems.

Notes:
1. Pressures listed above do not relate to the actual design pressure of the expansion joint products, but are the maximum surge or pressure for a specific control rod nominal pipe size.

In order to properly and successfully install a Proco Series 230 rubber expansion joint, specific conditions must be met, as well as ensuring the process is implemented by following our guidelines.