Long Branch is an oceanfront city of about 30,000 people in northern New Jersey. Much of the city borders the Atlantic Ocean to the east or the Shrewsbury River to the north. In 2012, Long Branch was one of many coastal communities that experienced severe flooding during Hurricane Sandy. The hurricane caused nearly $69 billion (in 2012 dollars) of damages, making it the second costliest U.S. hurricane on record at the time.

As water levels rose in Long Branch during the hurricane, the city’s current drainage system became susceptible to flow reversals. Water from tidal basins and the river backed up into apartment complexes and streets. Instead of drawing  water away from the city, the city’s drainage systems exacerbated the storm situation. “One of the issues [that Long Branch officials] found was that the drainage system ended up being a path for flood waters to re-enter the town,” said Dave Gillespie, operations manager at Valve Tech Sales. “So instead of carrying water away from the town, it would actually re-flood via the drainage system.” 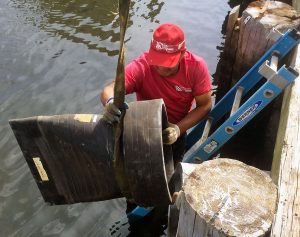 A 24″ ProFlex™ 730 slip-on valve being readied for install

To prepare for future severe weather events, the city decided to update its current drainage system to better protect the coastline FEMA provided funds to upgrade Long Branch’s storm drainage system. As a result, the products used in the application needed to meet FEMA’s specifications.

Long Branch decided to retrofit its current drainage system, which would allow the city to achieve its objectives without needing to modify much of its current infrastructure. However, working with existing structures created a challenge when designing the valves, as each site required a customer installation. The need for custom applications on this project made it a good fit for Proco Products, Inc., Gillespie said. “It was a specialized product that Proco could excel at producing,” he said. 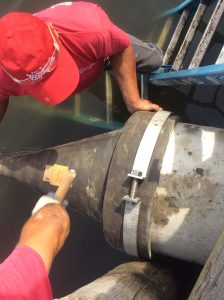 A perfect install. SS clamps being fitted to ensure secure attachment to the pipe.

The contractor for the project was Precise Construction, which is based in Freehold, New Jersey. To provide the contractor with cost savings, Gary Slater, a sales representative at Atlantic Waterworks, priced out Proco ProFlex™ Style 730 and Proco ProFlex™ Style 79o duckbill check valves for the project. The main reason Proco valves were selected was because of their cost effectiveness, and the benefits of algae and barnacle resistant elastomers, Slater said. “We were able to save the contractor a substantial amount of money, which got passed along to Long Branch and FEMA,” he said.

Precise Construction was awarded the job, and FEMA approved the use of Proco check valves for the project. The check valves were designed for each installation size so that the pipe size could be matched to the valve and the amount of head pressure association with the valve. Valves ranged in size from 12-in. diameter to 48-in. diameter and were installed in or on concrete and PVC pipe.

The finalized design was implemented in 2017, and installation  of the project was completed in early 2018. Installing the valves in these large pipes created some unique challenges. In some cases, pieces of deteriorated concrete pipe need to be cut out before the valve could be installed. Also, as some installations were completed in water or on small boats,work needed to be schedules with tides in mind. 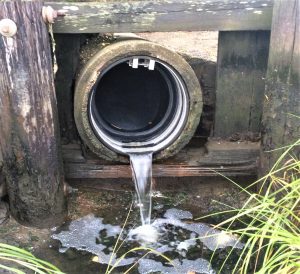 With Long Branch’s upgraded drainage system, each valve allows its respective location to drain properly under normal circumstances. In the instance of tidal reversal or flooding, the valves will shut off to prevent backflow.  As a result, the city of Long Branch is now less susceptible to flow reversals during future severe weather events, according to Gillespie. “The town is much better protected for future, large-scale tidal inflows or storm surges,” he said. “Under storm conditions, (the valves) will give greater storm protection to the town.”