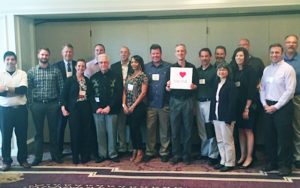 Rob Coffee pictured with members of the FSA

I like to joke that I’ve been in the expansion joint business since I was 5 years old. That’s how old I was when I saw my first expansion joints. In 1968, my father went to work for a company that manufactured metal bellows, and so there was a lot of talk about expansion joints at the dinner table.

In 1979, as a freshman in high school, I went to work for an expansion joint manufacturer, starting in the mail room and moving up through the ranks while working my way through college. While I was just getting started with expansion joints, two senior-level experts, Gene Johnson and Merv Vater, were forming Proco Products (previously PROtective COatings), which was launched in 1985.

Johnson and Vater were both involved in the Fluid Sealing Association, of which I am currently an active member. But while I’ve only been participating for the past 8 years, members from Proco have been making major contributions to the FSA since 1985.

One of the most important contributions by Vater, who was elected to the FSA Board of Directors in 1996, was the Piping System Handbook, which Ed Marchese, current President & CEO of Proco Products, also worked hard to update and push out to the industry. Ed Marchese, who has also served as an FSA president in the past, felt it was essential that people who grow up with organizations to become more “seasoned” professionals should get involved in the industry and “serve”.  He called on me to become active with the FSA, and now I am involved  in a great deal of activity designed to provide engineers and end users with a place where they can find meaningful information that will help them design new systems or improve the systems they already have in place.

Being a member of the FSA has really expanded my horizon. I’m an “expansion joint guy”, but working with the FSA has given me a greater understanding of seals, packing, gaskets and sealing technologies that I might not have otherwise learned about. One thing I really appreciate is how much closer the FSA has brought me to other industry professionals, giving us the ability to discuss markets and issues we all face.

How cool is it that a group of competitors can come together for the good of the industry?  It’s really a friendly group of volunteers that work together to write standards for the industry. Our group collaborates on topics that are relevant to the industry, writing standards and outlining best practices that ultimately help the pump systems community. The publications developed by the members of the FSA are extremely helpful for the design of fluid piping systems or ducting systems that move air.

I’m super excited to be working on the Piping System Handbook with my fellow Rubber Expansion Joint Division Members. We have been working on it all year long and will be finishing it during the FSA Fall meeting this month, with the hope of releasing it by the end of the year. The 8.0 full revision update will bring our manual into the digital age, has new designs for engineers to review and will help engineers and end users design or maintain their piping systems.

Our group of volunteer professionals lend credence to the ducting designs because of their in-depth knowledge of expansion joints and the industry experience we have out in the field dealing with all sorts of different product and application issues. The people at Proco are taking their real-world experience and are contributing that to the standards and guidelines which are being developed and defined through the FSA. I invite you to check out the many publications the FSA has published, or learn how to expand your horizons by becoming a member of the FSA.

If you have questions related to expansion joints, feel free to contact me ( robc@procoproducts.com ) or post a question in the Empowering Valves Industry Forum.

*Reproduced from an article featured on www.empoweringvalves.com*