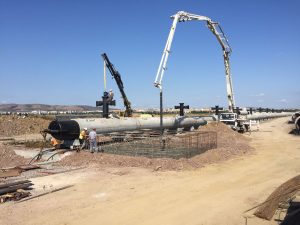 Final assembly prior to operation

The Water Authority of Istanbul, which owns a biological wastewater treatment plant, serves a population of about 15 million people in the city of Istanbul, Turkey. To meet stricter environmental regulations, the Water Authority approached Marine Consultants Group (MCG) in the spring of 2017 to find a suitable product to provide adequate diffusion for their marine waste water outfall. Marine Consultant Group worked with Proco to design and engineer duckbill diffusers to accommodate outfall sewage from the treatment plant through an 87 inch diameter steel pipe. The pipe extends 1.35 miles (2230 meters) along the bottom of the ocean and discharges at about 154 feet below sea level. 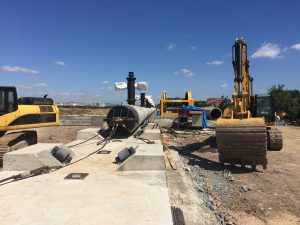 The 87-in. manifold pipe prepared for submersion

There were several challenges Proco needed to keep in mind for this project. One concern was that diffusers and duckbill check valves might be damages by passing marine vessels. To address this concern, Proco needed to determine the appropriate diffuser length, which in this project was about 741.5 feet at the farthest end of the 1.5 mile run on outfall pipe. Previously, engineers and contractors were often required to blind flange some of the ports so that they would be functional with less flow rates and opened to allow for future maximum flow rates. Maximum flow was calculated to handle requirements with a 20-year future outfall rate. However, the present flow rate will not be functioning at maximum output, as a result, Proco and MCG needed to design appropriately sized check valves to alleviate this concern. 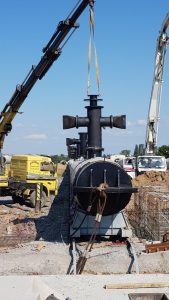 Cranes setting the ProFlex assembly on the manifold

Another benefit of using duckbill check valves for this project was to prevent saline intrusion  into the line when there is not inlet pressure. Different head pressures between seat water and discharge water cause sea water to enter the line when there is low head pressure or when there is no inlet flow. If this backflow is not prevented, the ports may be blocked or plugged, and marine life can enter the lines. As a result, the calculated and engineered dilution ratios will then not be achieved. Finally, duckbill check valves increase the jet velocity and provide a better dilution value than traditional flap gates, even with low flow rates. 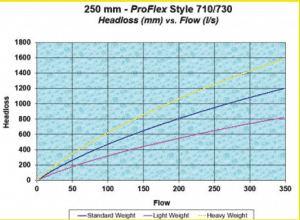 An example of a sized diffuser flow rates

In addition to these benefits, the Proco ProFlex™ Style 710 duckbill check valves’ highly engineered elastomer maintains its memory after a long period of staying open or staying in a closed position. One of the biggest advantages of the elastomeric valves is that they are 100 percent barnacle and Algae resistant, which is an important feature for a salt water project. Proco’s engineering team also provided full assistance with supplying the head loss calculations.

Following the installation of the Proco ProFlex™ Style 710 duckbill check valves, the finished assembly was charged with air to allow buoyancy and was then dragged into a determined position and allowed to drop to the sea floor. This allowed the Proco 710 valves to become operational and allow the appropriate outfall diffusion through each of the 46 valves. The system has been a fully functional success for the region, and Proco continues to offer assistance and engineering expertise on systems comparable to this on a globally active basis.

For more information on ProFlex™ check valves and how they can help you, contact a Proco representative for an engineered solution. Proco can also be reached at 800-344-3246 or 209-943-6088.