Piping System Engineers – Have you ever come across the need to supply rubber expansion joint/control units in a piping system where the flanges you want to attach have ASME B16.47 Series B drilling? If so, then you will know that the conventional control rod setup can be challenging as the attachment area for a traditional triangular control rod plate is greatly reduced. With ASME Series B16.47 Series B drilling the bolt circle for the flange is closer to the O.D. of the pipe than Series A drilling.

So what design can be used for ASME B16.47 Series B drilling? 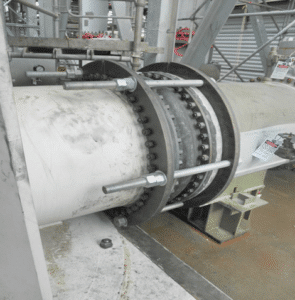 Using the ITR design will eliminate the complication of a traditional control rod set up on the back side of the mating flange where the rod plates do not have enough webbing from the I.D. of the plate to the I.D. of the holes on an ASME B16.47 Series B flange. The only other option  a client might have when dealing with ASME B16.47 is a control rod setup where thick fabricated split flange plates are supplied so that the resultant thrust loads from the rubber expansion joints are evenly distributed to every bolt hole (see photo).

In conclusion, the best design for ASME B16.47 Series B bolting when using a rubber expansion joint is the Interior Tie Rod Design configuration. To learn more about this design, click here.